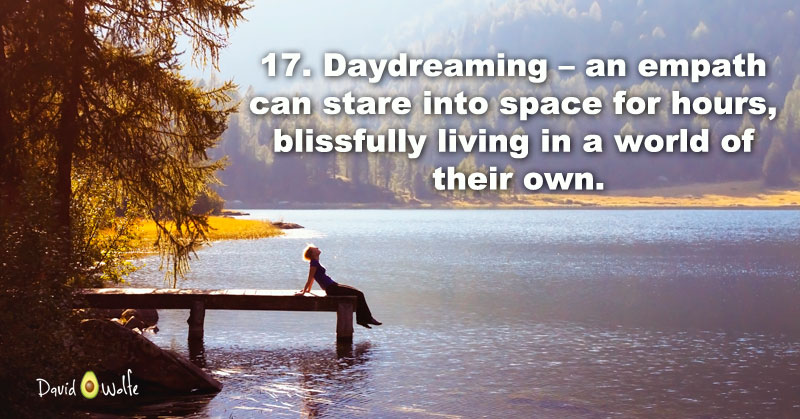 20 Ways To Know You Are An Emotional Empath

Being an emotional empath means you are affected by the energy of other people, and you have the ability to feel and perceive others.

As described by Dr. Judith Orloff, empaths are highly sensitive, finely tuned instruments when it comes to emotions. They feel everything, sometimes to an extreme. They are naturally giving, spiritually attuned, and they are good listeners. Being an empath is more than being highly — empaths can perceive physical sensitivities. They often know the motivations and intentions of other people.

These are 20 of the most common traits of an emotional empath:

Empaths know things, without being told. It’s something deeper than just intuition or a gut feeling. The more attuned an empath is, the stronger this gift becomes.

Places that are full of crowds like shopping malls, supermarkets or stadiums can feel overwhelming to an empath, because they feel the mixed emotions of those around them.

3. Feeling the emotions of others and taking them on as your own

This is an extremely strong indicator that you’re an emotional empath. Some empaths can even feel emotions from those who are a vast distance away.

4. Watching violence, cruelty or tragedy on T.V. is unbearable

The more attuned an empath becomes, the harder it is to watch violence on television, or even read about it in a book or in the newspaper.

5. Knowing when someone is lying

An emotional empath can tell if a friend or a loved one is telling lies, or if someone is saying one thing, but thinking or feeling a different way.

An empath can develop the ailments of others when they’re sick, somewhat like sympathy pains.

7. Looking out for the underdog

Anyone who is suffering in emotional pain or being bullied draws an empath’s attention and compassion.

Emotional empaths often become drained of energy, either from energy vampires or from taking on too much from others. This type of fatigue is one that sleep cannot cure.

Empaths may turn to something like alcohol, drugs or sex to block out the emotions of others. It’s a form of self protection in order to hide from someone or something.

10. Being drawn to healing

Holistic therapy and anything of a supernatural nature is of interest to empaths, as they are drawn to healing.

From singing, dancing or acting, to drawing or writing, empaths have a strong creative streak and a vivid imagination.

Being outdoors is a must for emotional empaths, and pets are an essential part of their lives.

Empaths need their quiet time. This can be seen in empathic children as well.

14. Getting bored or distracted easily

Work, school or home life has to be kept interesting for an empath, or they switch it off and end up daydreaming or doodling.

15. Striving for the truth

This becomes more prevalent when an empath discovers his or her gifts. Anything untruthful feels wrong to an empath.

An empath can stare into space for hours, blissfully living in a world of their own.

Anything that seems to be taking away an empath’s freedom, such as routine, rules or control, is debilitating to an empath.

An empath won’t talk about themselves much, unless it’s to someone they really trust. They love to learn and know about other people, and they genuinely care to listen.

20. An intolerance to narcissism

Emotional empaths are kind and often very tolerant of others, but they do not like to be around overly egotistical people, who put themselves first and refuse to consider other people’s feelings.

If you identify with all of these things, you may be an emotional empath. Take the empath test to find out if you are a healer, how well you use your tools and how much you unconsciously mirror other people.