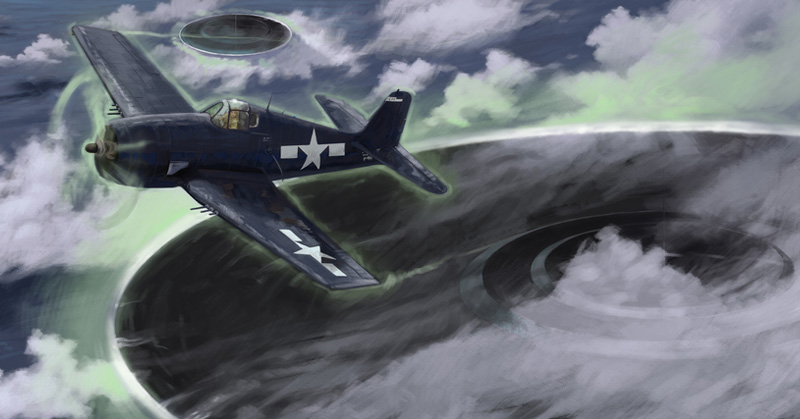 Unexplained disappearances of marine vessels and aircraft in a region loosely described as between Puerto Rico, Florida and Bermuda have been the cause of speculation for decades – the Bermuda Triangle.

Some claim it is just a creation spurred on by stories being told and altered over time, like a good game of telephone. Others claim it is a real phenomenon and travelers should beware of the region.

Pop culture has embraced the idea of its existence. Who remembers the infamous Uncle Fester of the Addams Family (1991) whose adoptive parents claim he had disappeared for 25 years in the Bermuda Triangle?

Or how about Fleetwood Mac’s song “Bermuda Triangle” from 1974? Lyrics include:

“I guess you’ve heard about the Bermuda Triangle/There’s something going on/Nobody seems to know just what it is/And the Air Force won’t let on/It might be a hole, down in the ocean/Yeah, or a fog that won’t let go/It might be some crazy people talking/Or somebody that we ought to know.”

There was even a Bermuda Triangle game for Atari 2600 in 1982! And popular shows in the ’70s had episodes centered around the Triangle’s mysteries like Scooby-Doo (1978) and Wonder Woman (1977).

If the Bermuda Triangle exists, what are the causes of the disappearances?

Many theories have been presented over the years, some more whimsical than others.

Yeah, we couldn’t even bring ourselves to summarize this viewpoint. Speaks for itself. (Read articles by Ancient Code , UK Daily Star, and UFO International Project.)

2. The influence of the lost continent of Atlantis.

Some enthusiasts claim the Bermuda Triangle is actually the location of the Lost City of Atlantis, specifically off the coast of Cuba. The theory goes that a pyramid in this underwater Cuban city of Atlantis is somehow responsible for the disappearances.

3. Vortices that suck objects into other dimensions.

These vortices are sometimes called “Vile Vortices” and the Bermuda Triangle is just one of five that exist in the Northern Hemisphere. These vortices may be “doors to other dimensions”.

While the term for this theory will make you giggle, it has more of a scientific rational. Releases of natural gas hydrates that occur on the ocean floor in great volumes may shoot gas at high speeds, rapidly changing the density of the surrounding water and air.  The cause of these gas releases could be underwater sediment slides and because of the amount of energy stored in these deposits, they may cause ships to not be able to float or aircraft engines to choke.

The release of this theory by the Science Channel at the end of 2016 caused some controversy as the scientists featured in the story stated they never researched the topic and only offered a suggestion when presented with satellite images. The producers of the Science Channel obtained satellite images of hexagonal-shaped clouds over the Bermuda Triangle and asked two meteorologists what they could be. Apparently, they are also visible over the North Sea as well. Nevertheless, the theory was that strong microbursts called “Air Bombs” blast air out of the bottom of a cloud onto the ocean at speeds up to 170 miles per hour, creating waves that can reach up to 45-feet. Being that 10-foot and 20-foot tsunamis cause a lot of damage, you can imagine what 45-feet waves could do to ships and planes!

6. Disruptions in geomagnetic lines of flux.

According to the National Oceanic and Atmospheric Administration “there is some evidence to suggest the Bermuda Triangle is a place where a ‘magnetic’ compass sometimes points towards ‘true’ north, as opposed to ‘magnetic’ north”. Some state this anomaly creates navigational problems that result in the disappearance of ships and planes, but the U.S. Navy says pilots are trained to fly with the loss of electronic navigation and this compass variation has been known and corrected by ships since the nineteenth century.

When the first unexplained disappearances occurred, technology was a lot different for weather forecasting as well as for communications and vessel retrieval. In recent years, ships have “disappeared” but have been found to have occurred due to human error. Some have piloted into tropical storms and hurricanes when they shouldn’t have, like the 2015 loss of the cargo ship El Faro and the S. Sandra in 1950. Not only do the majority of storms and hurricanes in the Atlantic pass through the Bermuda Triangle, but also the Gulf Stream can cause rapid, sometimes violent, changes in weather.

The Origins of the Legend

The legend of The Bermuda Triangle appears to have its origin in 1950. In that year, a writer for the Associated Press, E.V.W. Jones, wrote about the five Avenger torpedo bombers who mysteriously disappeared in 1945. Two years later, George X. Sand wrote an article titled,  “Sea Mystery at Our Back Door”, for Fate magazine. It has been suggested that the term “Bermuda Triangle” first appeared in the February 1964 issue of Argosy magazine when writer Vincent Gaddis described the mysterious disappearances of ships and planes. Later, in 1974, a popular book called “The Bermuda Triangle” was published by Charles Berlitz. This book might be responsible for the endurance of the legend in popular culture.