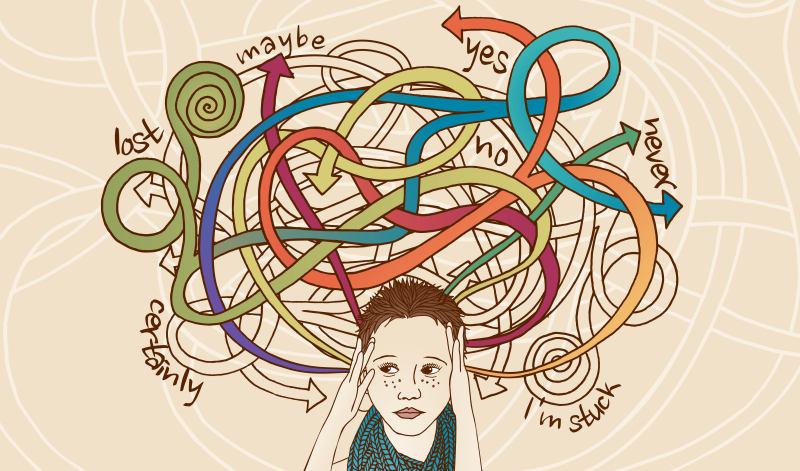 5 Things Only Overthinkers Will Understand!

Whether it’s worrying too much about a presentation for work or school, beating themselves up over a mistake they made days ago, or trying to decode an innocent text, overthinkers often get stuck in their own heads, wondering how to get out. There are those who overthink things once in a while, maybe when they’re about to make a big decision. But true overthinkers are constantly plagued by an inner monologue, desperately trying to peel back the layers of every situation. They are either regretting something that happened in the past, or worrying about the future.

Overthinking isn’t as harmless as it might seem. Research finds that dwelling on your mistakes can increase your risk of mental health problems. It also can lead to serious emotional distress that can cause one to resort to an unhealthy coping strategy. If you have a friend, family member or a significant other that struggles with quieting their brain, it’s important to understand these five things about true overthinkers:

1. They’re Very Remorseful When They Mess Up

When an overthinker makes a mistake, you can bet that it will haunt them. Even the smallest of things can make them feel extreme remorse if they believe something is their fault. If an overthinker tells you that they’re sorry, you can absolutely bet that they are truly and genuinely sorry.

If you’re in a romantic relationship with an overthinker, you might pin them as insecure or controlling. When you tell them you’re going out on Friday night, chances are they’re sitting at home freaking out about what you could be doing, replaying all of the possibilities in their head over and over like a slideshow. You could be cheating, you could be hurt, you could be broken down somewhere with no way home… They know it’s probably unlikely, but that doesn’t stop them from worrying. Overthinkers aren’t crazy — Their worrying is extremely hard to resolve.

3. They Can Have Fun

Constantly overthinking doesn’t make a person boring or a drag to be around. Overthinkers love getting a chance to let go and have fun, whatever their outlet for that might be. But if it includes alcohol, you can bet that an overthinker will wake up with more than a hangover. Their head will be full of questions about what stupid things they said or did while under the influence.

Someone who overthinks things can’t just send a quick response to your text. They choose their words wisely to make sure that what they’re saying can’t be misconstrued. Posting a status or a picture caption on social media could take hours, and figuring out what to do for date night could take longer than that. Overthinkers mean well, they just tend to be a bit indecisive.

5. They Want to Escape

Finding a friend or a significant other that can drag overthinkers out of their thoughts for a while is something they cherish. They love spending time with someone they can get lost with, be themselves around, and forget about their worries for a short period of time. If you have that effect on an overthinker, you can bet that they don’t want to lose you.