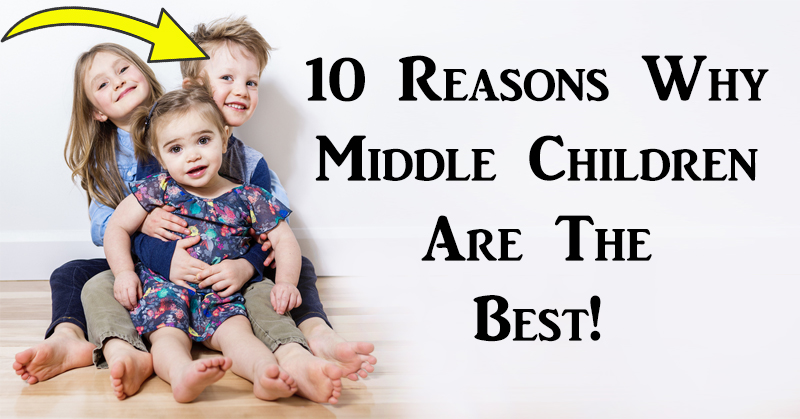 10 Reasons Why Middle Children Are The Best!

Being a middle child can be tough. They’re often stuck between a glowing, straight-A older sibling and a precious, coddled last-born. They aren’t the first-born and they aren’t the baby of the family. The middle child often ends up feeling a little left out and overlooked.

Still, there are certain advantages to being the middle child. Middle children end up with some beneficial traits thanks to their unique position in the family. Here are just a few reasons why the middle child is the best child:

Middle children often get the short end of the stick, so they face an extra challenge when it comes to getting their way. This turns them into masters of manipulation and negotiation. Katrin Schumann, author of The Secret Power of Middle Children, found that 52% of American presidents were once middle children!

2. They Keep The Peace

Being a good negotiator also comes in handy when conflict arises in the family. Both Nelson Mandela and Martin Luther King Jr. were middle children. Being in the middle often makes you a keeper of the peace.

Sometimes, middle children improvise in order to shift the blame. Other times, it’s to get a little attention. Either way, middle children are great at inventing stories on the fly. And most of the time, they’re pretty entertaining.

4. They’re The Glue Of The Family

5. They Work Hard And Play Hard

Middle children often have to work hard to get attention growing up. That work ethic carries into their adult life. They work hard, but they still know how to have fun.

6. They Do Their Own Thing

Independence is a common trait in middle children. They usually move out of the family home as soon as possible, simply because they’re ready to do their own thing.

Middle children end up having a lot of time to themselves. This allows them to let their creative juices flow as they find ways to entertain themselves.

8. They Go With The Flow

Middle children get used to shaking off their disappointment. They go with the flow because they know when to pick their battles. They usually have a laid back and happy-go-lucky personality.

The first-born child usually carries all the weight of their parent’s expectations. The last-born child often gets a little spoiled. The middle child, however, gets to live a simple and quiet existence without all that pressure or coddling.

The middle child gets everything handed down to them. Toys, clothes, you name it. When the last kid comes along, the middle child has to share with their baby sis or baby bro. They’re used to sharing, which often makes them easy to get along with.

Sources:
Wimp
The Secret Power of Middle Children
Parents
The Stir
The Stir