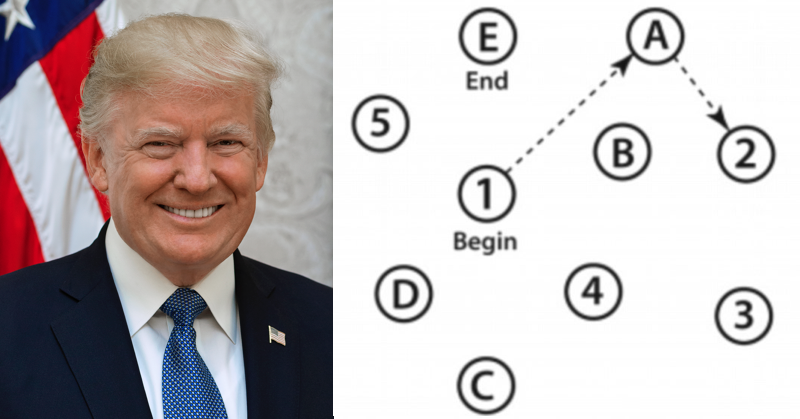 Unsurprisingly, the results of President Donald Trump’s medical test have caused quite a stir online this week.

While much of the discussion is partisan in nature, some have found themselves intrigued by the various tests the President underwent as part of the routine procedure.

Among those tests is the Montreal Cognitive Assessment (MoCA), a 10-minute test designed in 1996 to assess – among several things – one’s concentration, attention, memory, executive functions and visual skills.

President Trump received a perfect score on the test. Think you can match that?

Grab a piece of paper and let’s find out! It won’t be 100% accurate since you’ll be the one administering the test to yourself but it’ll give you an idea of how you stack up against the most powerful man in the world!

In this part of the test, physicians instruct patients to pair up five numbers and letters in ascending order (1-5 and A-E).

The patient must draw lines between each pair on the chart below. None of those lines can cross each other. Any mistake that is not immediately corrected results in a score of 0 for this section of the test. 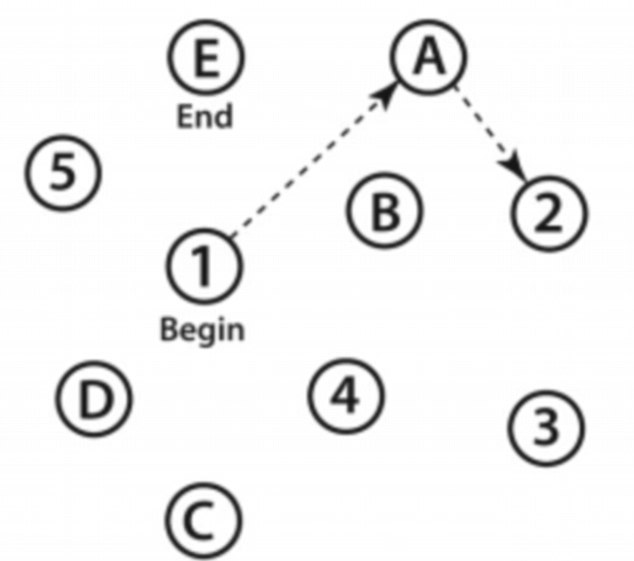 In this section, the patient must draw a cube that matches the one presented in the picture below. To pass this section, the cube must contain all the necessary lines, which must be of similar length and relatively parallel.

If the patient fails to meet any of those criteria, they will achieve a score of zero for this section.

Give it a try! 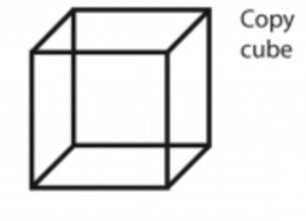 Here, patients must draw a clock and set the time to 10 past 11.

Patients achieve one point if the clock face is a relatively perfect circle. Simple imperfections are allowed, such as a miscalculation when closing the circle.

Patients achieve another point if all clock numbers are present, in the correct order, with no additional numbers. You can place the numbers outside the clock’s circle.

Another point is awarded if the patient places hands on the clock indicating the correct time. The hour hand must be shorter than the minute hand and each hand must be centered in the clock face.

Can you draw a perfect clock?

This one’s pretty simple – you’ve just got to name each animal pictured below. You lose a point per animal you name incorrectly.

In this section, the physician reads a set of words – one each second. After hearing the words, the patient must recite as many of them as possible. Order does not matter.

For the purpose of this exercise, take a look at the words above, then look away from your screen and write down the words you remember on a piece of paper.

In part two of this section, the physician reads the patient ten words.

Use these words for this example:

There are no points gained for this section – only one point lost (per section) if the patient cannot remember the words.

In this section, the doctor reads a list of five numbers, one per second. The patient must recall them exactly.

Read the numbers to yourself at a rate of one per second and see if you can recall them correctly!

For the next part of the numbers section, the doctor reads the patient a set of numbers – again, one per second – and instructs the patient to recall them backwards.

In these two number sections, the patient receives one point per sequence correctly remembered.

Here, the doctor reads the patient a set of letters at – you guessed it – one per second and instructs them to tap their hand every time they hear the letter “A.”

Patients receive one point if they have zero errors or just one.

Give it a try!

In this section, the patient must start at 100 and count down by subtracting seven each time until they are told to stop.

Can you do it?

Here, the physician reads the patient one sentence they must recite correctly.

“I only know that John is the one to help today.”

Once that sentence is recited, the physician reads another, with the same instructions:

“The cat always hid under the couch when dogs were in the room.”

In this section, the patient must think of words that start with a letter presented by the physician. The letter is F and the words can be anything except proper nouns and similar words like force, forced, etc.

Patients receive one point if they make it to 11 words or more in one minute.

Can you name 11 words beginning with F in one minute?

The patient has to describe the similarities between the concepts expressed in the following word pairs:

Unacceptable answers include simple ones like “trains and bicycles both have wheels” and “rulers and watches both have numbers.”

Acceptable answers include ones like “trains and bicycles are both means of transportation.”

Patients receive one point per word pair they connect properly.

Here, the patient must recall all of the words from Part 5 without any cues whatsoever.

They receive one point for each correctly recalled word.

Patients must be able to recall the exact date and the name of the city they’re in. They receive one point for each right answer but no points at all if they make any errors.

Once you’ve completed the test (again, it won’t be 100% accurate since you’ve administered it to yourself), add up your points and check out the key below.

16 Points: You have the cognitive health of an Alzheimer’s patient

Around 22 Points: You have the cognitive health of someone with Mild Cognitive Impairment

30 Points: Perfect score! (this is what Trump achieved).

So, how’d you do? Let us know in the comments!