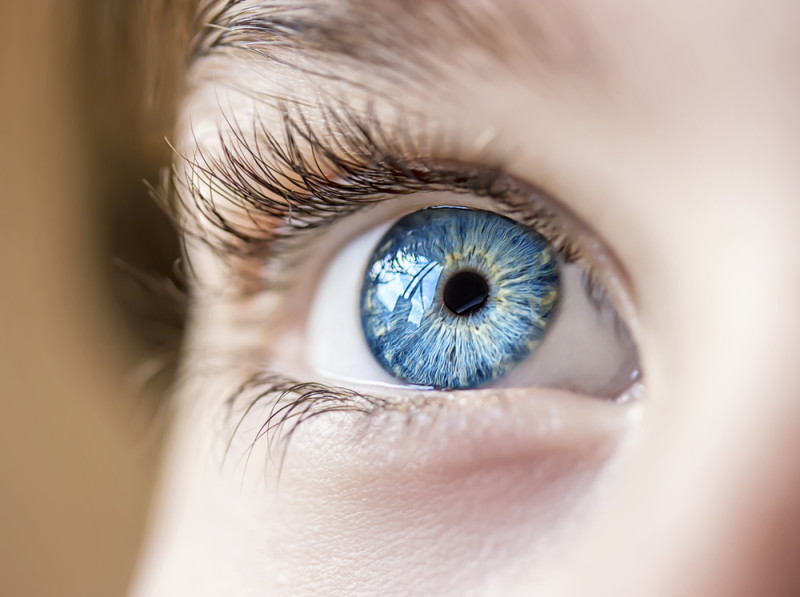 Believe it or not, blue eyes were not always around. Our early, early ancestors more than likely only had brown eyes. So where did blue come into play? That was a mystery until 2006.

Before we get into that, let’s talk about the science behind blue eyes and why they look blue.

The iris is made up of two separate layers: the epithelium in the back and the stroma in the front. The epithelium is composed of black-brown pigments and is only two cells thick. Some people have dark specks in their eyes. This is the epithelium showing through.

The stroma is made of colorless collagen fibers. Sometimes the pigment melanin is present, and sometimes it contains excess collagen deposits. It is these two things, melanin and collagen, the determine the color of a person’s eyes.

According to Science Alert:

“Blue eyes are potentially the most fascinating, as their colour is entirely structural. People with blue eyes have a completely colourless stroma with no pigment at all, and it also contains no excess collagen deposits. This means that all the light that enters it is scattered back into the atmosphere, and as a result of the Tyndall effect, creates a blue hue. Interestingly, this means that blue eyes do not actually have a set colour — It all depends on the amount of light available when you look at them.”

If you think about that for a second, it is really awesome!

However, where did blue eyes come from?

According to recent research, all people with blue eyes come from one common ancestor!

“New research shows that people with blue eyes have a single, common ancestor. Scientists have tracked down a genetic mutation which took place 6,000-10,000 years ago and is the cause of the eye color of all blue-eyed humans alive on the planet today.” (Source)

It should also be noted that even though blue eyes are becoming more and more rare, it is unlikely that they will disappear forever. (Can you believe they started from one person!)