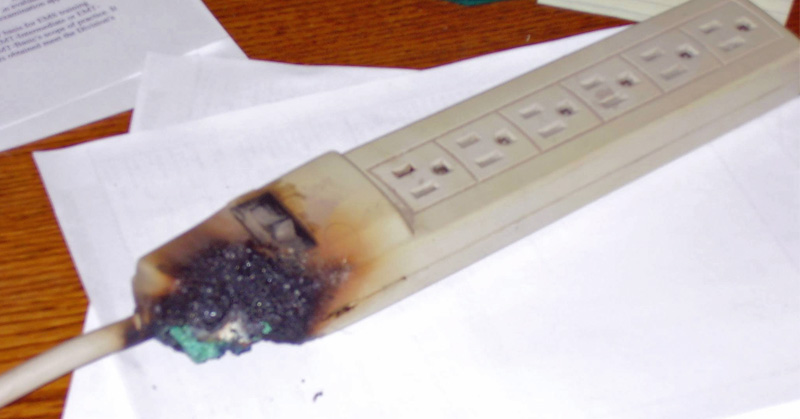 The Umatilla County Fire Department District 1 is warning citizens about a simple mistake many people make in the winter time when trying to heat their homes. Power strips, popular for their ability to add several outlet connections utilizing just one plug, are vulnerable to melting when space heaters are plugged in to them. Extension cords reportedly run the same risk of overheating and causing a fire.According to this fire department, space heaters we might use to keep warm in the winter require such a high flow of energy that it makes power strips like the one pictured below melt and even catch on fire.

The picture the Umatilla County Fire Department District 1 used in their picture was allegedly the same power strip that one of their own firefighters had melted when they “misused” the strip. According to National Fire Protection Association (NFPA), space heaters were involved in 79% of fatal home heating fires. The NFPA says that portable electric space heaters should always be plugged directly into the outlet and never into an extension cord or power strip. If you’re using a space heater to keep warm this winter: don’t plug them into a power strip or extension cord!

The fire department asked citizens to stay safe this winter and explained why it’s unsafe to use a space heater with a power strip:

The weather is getting colder, and people are pulling out their space heaters. We just wanted to remind you that you should NEVER plug a heater into a power strip. These units are not designed to handle the high current flow needed for a space heater and can overheat or even catch fire due to the added energy flow. Please share and stay safe this Winter season.

The Umatilla County Fire Department District 1 went on to explain that it isn’t about the power strip but how you use it, saying that even their own firefighters need a lesson:

This is an image from our fire station when a surge protector was misused. Even the firefighters need a lesson. The point comes down to proper use. Even the best equipment can fail if not used correctly. No one manufacture is at fault, yet it’s all about the end users ability to use the product safely.

Here is the full warning along with a picture of a power strip one firefighter melted:

The weather is getting colder, and people are pulling out their space heaters. We just wanted to remind you that you…