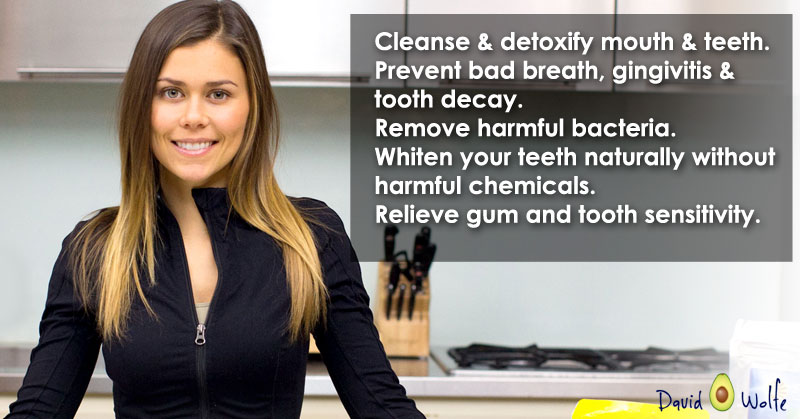 This is the Most Effective Natural Teeth-Whitening Method!

No one will deny that a beautiful smile is very attractive, warm and inviting! We have been taught since we were kids that brushing our teeth is very important and is something that we should do twice a day. In addition to brushing, we’ve been instructed to floss regularly and perhaps use some mouthwash, but that is it! However, as I have learned from my own research and holistic health journey, there is more that we can do to care for our teeth and make sure they remain pearly white.

Let’s face it, we all want white smiles, and there are plenty of products on the market to help us achieve them. Whitening toothpaste, whitening mouthwash, whitening strips for our teeth, and even whitening treatments at the dentist’s office. These methods may, in fact, work, but are they safe to use?

At-home whiteners have peroxides in them — usually carbamide peroxide. This is a medication used to treat earwax buildup, by softening, loosening and removing the wax. Carbamide peroxide is used in many bleaching products including those used to whiten teeth, and the most commonly observed side effects with a peroxide-based bleaching agent are tooth sensitivity and irritation of soft tissues in the mouth, particularly the gums. A level of carbamide peroxide considered to be safe to use is 10% to 20%. Some products on the market that contain this amount are eligible for the ADA Seal of Acceptance, but there are many whitening product options out there that do not have the seal. The level and type of active ingredients in these products vary widely.

In addition to tooth sensitivity from whitening products, dentists report seeing side effects that include gum irritation, bluish enamel, uneven whiteness, and — if the chemical manages to seep into a cracked tooth or an unfilled cavity — painful internal damage that can lead to a root canal.

These whitening products may work over time, but are the potential side effects worth it? If you want to try a more natural and safe approach to teeth whitening, let me introduce you to an ancient dental practice that the yogis of India have used for thousands of years. Like many things, they knew what was up, long before there were studies as proof!

Sounds strange, I know, but all you have to do is simply swish your choice of unrefined, high-quality oil in your mouth; similar to the way you would use mouthwash. Traditionally, yogis used sesame oil, but my personal favorite is raw organic coconut oil. It has a light, tropical taste, and as a bonus, lauric acid (one of the fatty acids in coconut oil) has also been proven to be antimicrobial, it can kill bacteria, viruses and fungi.

This can be done in five to 20 minutes. The process attracts and removes bacteria, toxins, and parasites that live in your mouth or lymph system, and also pulls congestion and mucus from your throat and loosens up your sinuses, which is amazing!

With the help of your saliva, all these nasties bind with the oil, are ready to be disposed of. You remove a large number of the bacteria and plaque in your mouth with each use. YAY!

Oil Pulling Can Reduce Harmful Bacteria in The Mouth

Streptococcus mutans is one of the main bacteria in the mouth and a key player in plaque buildup and tooth decay.

In a study from 2008 with 20 boys, oil pulling (using sesame oil) caused a reduction in the number of Streptococcus mutans in the plaque in as little as two weeks.

It was not as effective as a chlorhexidine mouthwash, but much cheaper and MUCH less nasty.

Gingivitis is caused by inflammation of the gums and happens when the immune system starts attacking the bacteria in the plaque.

Bad breath, otherwise known as halitosis, is in many cases (but not all) caused by the smell of chemicals and gases produced by bacteria in the mouth.

It makes sense that if you get rid of some of these bacteria, you’ll reduce bad breath.

In the third study of 20 adolescents, oil pulling therapy significantly reduced all markers for bad breath and was just as effective as chlorhexidine mouthwash.

Journal of Antimicrobial Agents and Chemotherapy

Journal of Indian Society of Pedodontics and Preventative Dentistry

Journal of Indian Society of Pedodontics and Preventative Dentistry

For more inspiration and healthy recipes, check out
my other health blogs on DavidWolfe.com.
If you’re looking for a virtual assistant, find me at GillianB.org.