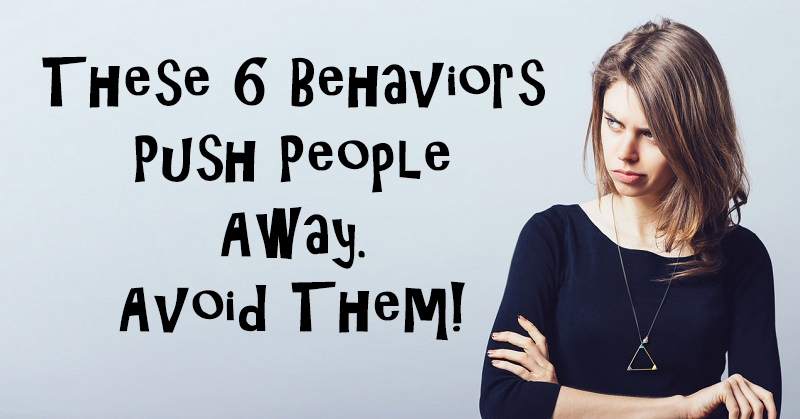 These 6 Behaviors Push People Away. Avoid Them!

Most of us have been guilty of pushing someone away at some point in our lives. Some do it consciously, deciding that distance is best, while others may not even realize what they’re doing. If others seem to be constantly distancing themselves from you, it may be related to one of these six behaviors.

Selfishness is often noticed by others, long before you would recognize your own behavior as selfish. Being a little selfish to keep someone you care about in your life is one thing, but making selfish decisions without any regard to someone close to you will undoubtedly push that person away. Being selfish will cause the people around you to feel like they don’t matter. If you’re only concerned with yourself, you must not care about them as much as you say you do. If your friend or partner feels like their thoughts or opinions don’t matter to you, they’ll have no reason to stick around.

Regardless of your age, race, gender or socioeconomic status, you should always treat others with respect. If you think you are better or more deserving than others, it will show. No one wants to be looked down on or treated disrespectfully. You can be proud of your beliefs and accomplishments without degrading those around you.

Being confident and comfortable in your own skin is great. But there is a line between being confident and being conceited. No one likes to sit around and hear someone pump themselves up by bragging about their accomplishments, their looks or their possessions. If you have an over-inflated ego, you’re most likely pushing others away. Being conceited makes you seem unauthentic and uninterested in anyone or anything other than yourself.

It’s one thing to be a perfectionist in your own life. Maybe you like to keep your house sparkling clean, or you stay at the office late to work on projects, but if your perfectionist tendencies begin to affect other people, you might push them away. No one is perfect. Striving to do your best is great! But make sure you aren’t putting others down for their mistakes. Expecting perfection from others may be unrealistic, and it could end up costing you the friendship of the people you’re close to. It’s important to remember that everyone makes mistakes.

5. Being a Chronic Complainer

People who are constantly complaining are robbing themselves of joy. Allowing negative energy to fill you and surround you may be your choice to make, but most of the time, others won’t want to be around that kind of negativity. You’ll only bring them down and ruin their day. Whining and complaining that life isn’t fair won’t make others want to be around you. They’ll most likely run the other way when they see you coming!

There is such a thing as constructive criticism, but it seems that most people don’t understand where the line is. If you’re constantly pointing out bad hair days, tired eyes, shoes that don’t quite match or anything else that you happen to not particularly be fond of in someone else, you are far from giving constructive criticism. Honestly, you’re just being mean, and you’re definitely pushing people away.