The Science Behind Power Naps: How and Why They are So Good for You!

It is a common problem in most households. Kids never want to take a nap, but parents and even teenagers long for them. Daily naps are a common habit for college students who have the time and even young adults who are out of college. However, once one joins the working community or starts a family, napping goes out the window in favor of progress and getting stuff done. But, we need naps.

Unlike most mammals, humans tend only to sleep once in the day. Yet it seems that this sleep pattern does not work for everyone. “Unlike 85% of all mammalian species, humans sleep just once a day. Scientists aren’t sure if we’re naturally monophasic (as opposed to polyphasic) or if it’s modern society that has made us so. Regardless, it’s clear that we’re not getting enough sleep. Nearly a third of us say we’re simply not getting enough of it.” (Healthy Holistic Living)

All of these can be obtained just by giving in a taking a nap when one feels like they need one and there are studies to prove it.

In a study carried out in Greece, researchers found that adult males who took an afternoon nap at least three times per week were 37% less likely to die from a heart-related disease compared to men who never take a short afternoon nap.

A groundbreaking NASA study from 1995 (pdf) looked at the beneficial effects of napping on 747 pilots. Each participant was allowed to nap for 40 minutes during the day, sleeping on average for 25.8 minutes. Nappers “demonstrated vigilance performance improvements from 16% in median reaction time to 34% in lapses compared to the No-Rest Group.”
(Healthy Holistic Living)

This is how to break down the length of the nap and the benefits received according to WebMD. 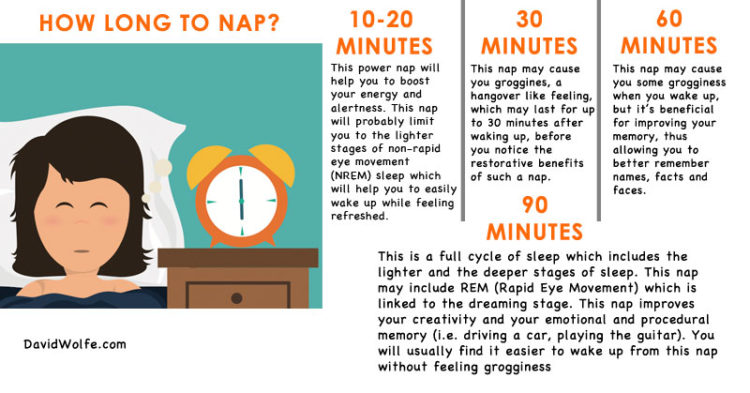 Take a look at the video below to learn more about the power of sleep and why we need it.