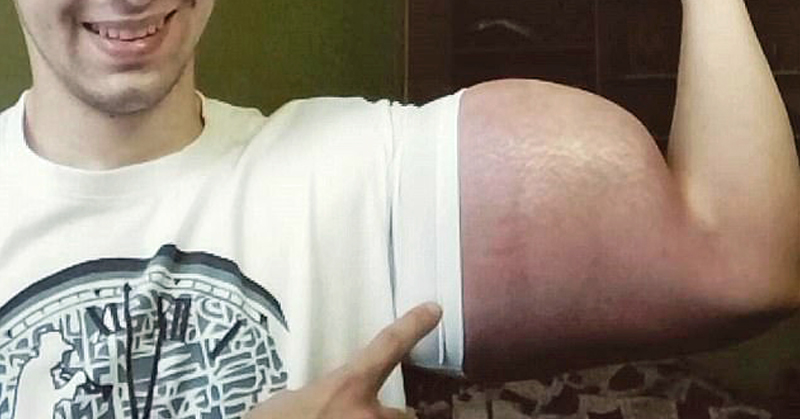 A picture of a man with freakish comic book-sized biceps is going viral on social media – and the explanation of how he engineered such a feat is causing concern.

Kirill Tereshin, 21, a Russian man from the city of Pyatigorsk has been bragging about his Hulk-like arms – and admitting that he gained them by injecting himself with dangerous chemicals to make them appear bigger.

Tereshin’s 24-inch biceps are not merely the result of hours of hard work in the gym and a diet of protein shakes, but were created by injections of “site enhancement oil,” commonly known as synthol, into his arms. 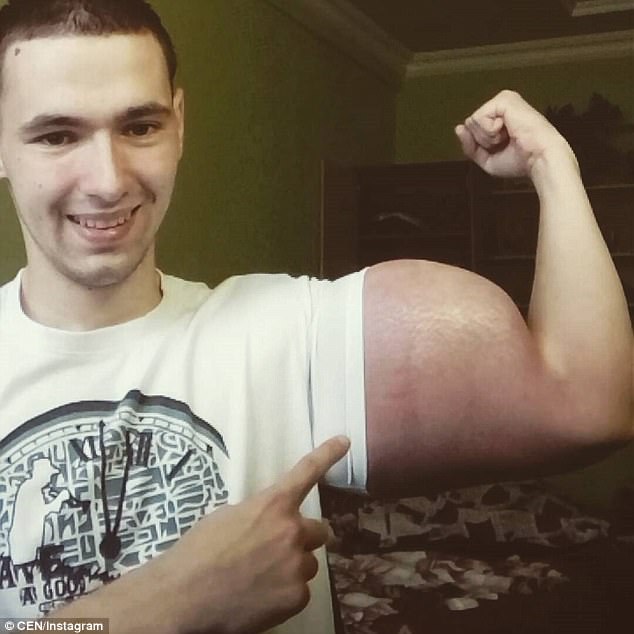 While Tereshin also works out, when he began injecting himself with synthol after leaving the army this summer, he increased the size of his biceps by ten inches in just ten days. Tereshin says he wants to break bodybuilding records with his chemically enhanced body.

Tereshin began by injecting 250 ml of synthol into his biceps, but found that only made them expand by no more than an inch. In fact, Tereshin said, “In order to reach such a size, you need to inject liters into your arms.”

For those considering turning themselves into a synthetic puffed-up muscle man, consider Tereshin also said, “I was doing it and getting a fever of up to 40 degrees, I was lying in bed, feeling like I was dying, but then it all turned out fine.”

While the oil injections have increased the size of Tereshin’s arms, he in fact has no extra strength as the muscles are not really as developed – they are just filled with a synthetic chemical, similar to men and women that have plastic surgery to add synthetic padding to their calves or breasts.

Synthol is known to be injected by some bodybuilders into muscles to change their shape ahead of a competition to “enhance” their body parts. 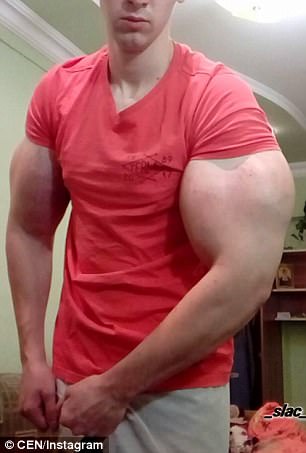 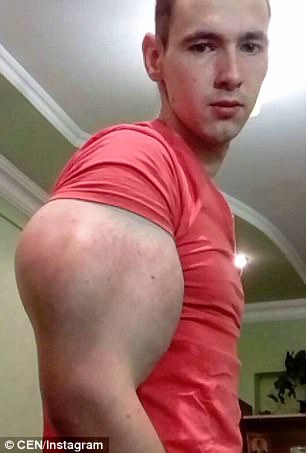 The substance is not illegal but doctors warn that synthol can cause pulmonary embolisms, nerve damage, infections, sclerosing lipogranuloma, stroke and oil-filled cysts or ulcers in the muscle. Synthol is made up of 85 percent oil, 7.5 percent lidocaine, and 7.5 percent alcohol.

In 2015, a Brazilian bodybuilder almost lost both his arms to amputation after injecting his body with synthol.

“I remember the doctor told me that they would need to amputate both arms – they said everything in there, all my muscles, were rock,” said Romario Dos Santos Alves. “I want other people to see the dangers, I could have died all because I wanted bigger muscles. It’s just not worth it. If you take it once there will definitely be a second time – it’s addictive.”