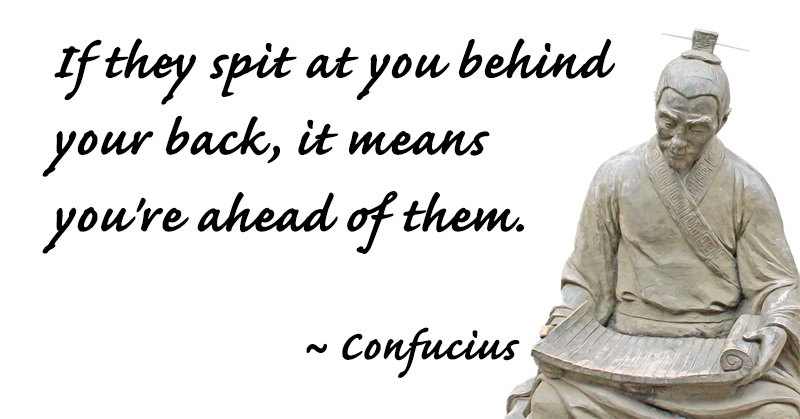 10 Little-Known Quotes from Confucius that Will Change Your Life!

Confucius is known as one of the greatest philosophers that ever lived. He was born in 551 B.C., and throughout his life, his works – which have been preserved in the Analects – focussed on ethics within the family, educational system and public.

After his death in 479 B.C., his teachings became the official imperial philosophy of China.

China is a pretty long way from America – both culturally and geographically. So why should we care about the teachings of Confucius? Well, they transcend culture and have the ability to impart great wisdom on anyone, anywhere.

Let’s take a look at 10 life-changing lessons from Confucius.

1. It does not matter how slowly you go as long as you do not stop.

Sometimes, we can feel anxious pressured to pick up the pace in life due to how fast the world around us seems to be moving. That’s where this advice comes in handy.

Just don’t try to incorporate it into your driving.

Sometimes, you really do need to floor it.

2. Never form a friendship with a man who is not better than you.

Sometimes, we settle for people who are a few steps below us in life because it makes us feel better about ourselves. Don’t do that. Find someone whose characteristics are going to challenge you to hone your skills and values.

3. When anger rises, think of the consequences.

Always keep an eye out for what’s on the other side of that frustrated action you’re about to take.

4. When it is obvious that goals cannot be reached, don’t adjust the goals, but adjust the action steps.

Even if it means it’ll take you a bit longer than you originally anticipated, keep on moving forward!

5. If you hate a person, then you’re defeated by that person.

I’ve got some bad news for ya, kid…

It’s one thing to be indifferent to someone who you perceive as negative. But if you spend your waking hours seething and hoping for another person’s demise, you’ve lost the battle against them that you shouldn’t have even attempted to fight in the first place.

Some people think that by surrounding themselves with possessions and people, they increase their value.

But wise people know that the only real way to increase their value is to search within in cultivate what lies there.

7. Wherever you go, go with all your heart.

Muhammad Ali believed that he would’ve been the greatest at whatever he did – even if he was a garbage collector. That’s the approach we all should aim to take in life, bringing passion and drive to everything we do.

8. Give instructions only to those people who seek knowledge after they have discovered their ignorance.

We all have our own ignorant beliefs – every single one of us. Don’t forget that in your attempt to correct someone else.

Wait until people have reached a place where they’re seeking your input and guidance in an unfamiliar area before you jump in.

9. Looking at small advantages prevents great affairs from being accomplished.

Instead of spending all your time thinking about how your boss loves your coworkers so much more, why not focus on something you know for certain – that you can push forward regardless?

10. If they spit at you behind your back, it means you’re ahead of them.

So just keep on strollin’.