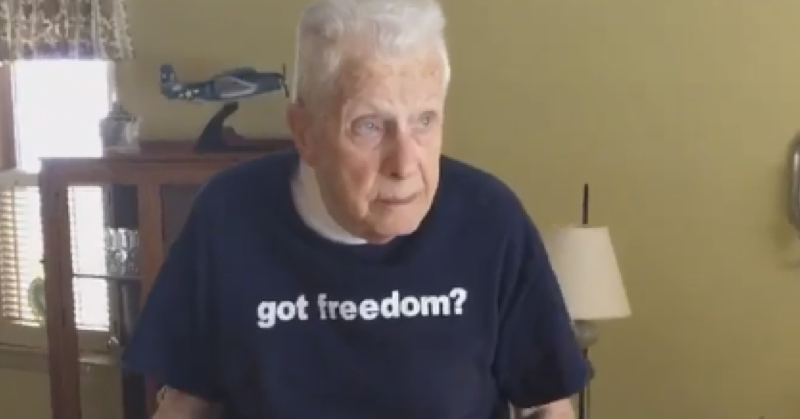 Charles Franzke has made waves online with a video that shows the WWII veteran expressing his holiday joy in a fabulously American way.

In the video below, Charles – who turned 94 on Thursday, according to Fox News – can be seen letting loose to the Christmas classic ‘Holly Jolly Christmas.’

The best part? His shirt, which reads ‘Got Freedom?’

Needless to say, the video has gone viral.

On the eve of his 94th birthday, this #WWII Navy pilot from WI wants to dance his way into your heart with Christmas spirit. #honorflight pic.twitter.com/1cp9TRne30

In addition to Christmas and his birthday, Charles is celebrating his 77th anniversary with his wife Beverly, according to close friend Karyn Roelke.

Is it any wonder he’s so happy?

Recently, Charles Franzke was granted an Honor Flight – a trip to Washington during which he participated in a ceremony honoring him and his comrades’ service.

He hopes to help raise money so other veterans can participate in similar services. Support the cause by donating here.