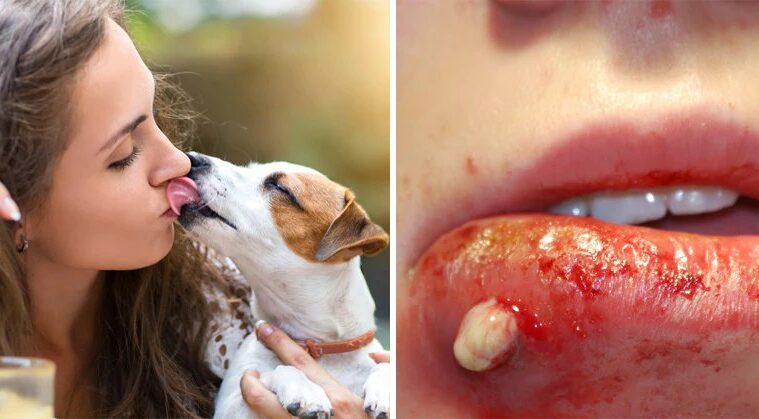 Parasites In Dogs: Why You Should Never Let Your Dog Lick You!

Are dog mouths really cleaner than human mouths? Uh, no. The cold truth is that letting your dog lick you may be harmful to your health. Dogs love to show affection with their tongue “kisses,” but those tongues could be harboring lots of unfriendly bacteria. Yes, parasites in dogs can spread to you!

As with humans, several different types of bacteria live in dogs’ bodies and can easily contaminate humans. Doctors also frequently find parasites! The most infamous form of parasites in dogs, heartworm, rarely shows up in humans. But there are several others that our four-legged friends do pass on to us. (1)

Here’s what you need to know about parasites in dogs. 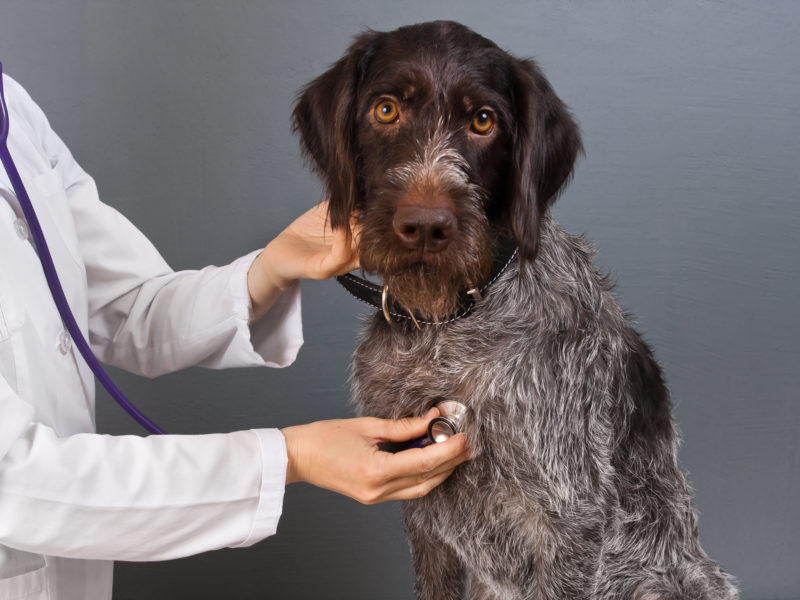 Heartworm, the most infamous parasite in dogs

Many dog owners get medication for heartworms at some point in their lives to help combat this problem in dogs. These common parasites can eat away at their health over time.

Heartworms typically enter the bloodstream of the animal from the bite of an infected mosquito. The worms literally grow up while living in and feeding off of the dog’s heart, and they may grow up to one foot in length. Scary for any dog lover! (2)

The parasites disrupt blood flow significantly, and a mild, persistent cough can often result according to the American Kennel Club. A reduced appetite is another symptom of this type of parasite in dogs, and the final result could be heart failure. (3)

If your dog experiences any of these symptoms, make sure to get him or her to a vet as soon as possible.

And please note: people can also get heartworms in rare cases.

The best way to prevent parasites in dogs naturally is to conduct a natural parasite cleanse periodically, to snuff out problems early. 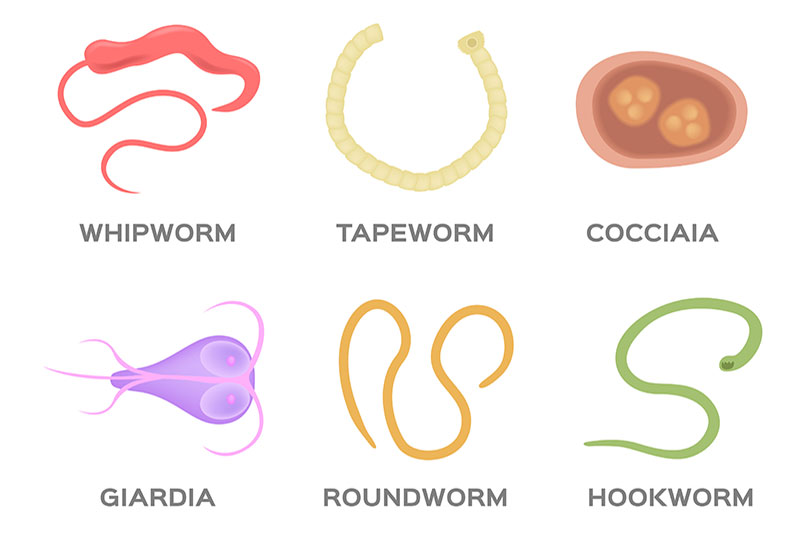 Most people focus on foods like pork and sushi when it comes to avoiding parasites, but parasites in dogs are a common problem! There are several different types normally found.

Simply by having a dog in your home, you’re may end up inviting parasites into your  living space. These parasites can be transferred to people if the conditions are right.

Intestinal parasites types in dogs include roundworms, whipworms, hookworms, tapeworms, as well as protozoa like giardia and coccidia.

Dogs typically contract these parasites when they are inadvertently ingested in contaminated soil, water, feces of food. They can also be transmitted when a dog eats an infected flea, according to Dr. Ruth MacPete. (4)

Puppies often get parasites from their mothers. While this is a more common problem in adult dogs, the health of the mother is key for preventing parasites in puppies.

If your dogs exhibit symptoms of parasites including malnutrition, weight loss, vomiting, diarrhea or anemia, it may be wise to try a natural parasite cleanse.

A parasite cleanse should be natural, made from organic or wildcrafted ingredients, and taken on an empty stomach morning and night.

Also, remember that fighting against parasites in dogs or in humans is a long-term battle won with consistency.

A parasite that causes vision loss in children and damage to the eyes can also be found. A total of 20% of dogs pass the eggs of this type of parasite, Toxocara canis, in their stool according to kidshealth.org. (4)

This is why so many naturopaths recommend a parasite cleanse, or simply a large consumption of anti-bacterial, anti-microbial herbs, for anyone who has pets.

Dog mouths are hotbeds of unhealthy bacteria and bad bugs 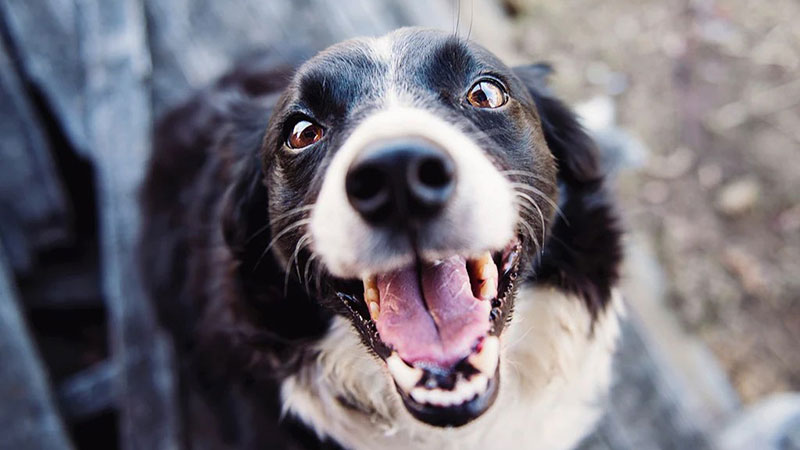 According to John Oxford, professor of virology and bacteriology at the Queen Mary University in London, dogs are drawn to bacteria laden areas. Parasites, mold, and another contaminants are also present in these areas. (5)

“It is not just what is carried in saliva,” Oxford said. “Dogs spend half their life with their noses in nasty corners or hovering over dog droppings so their muzzles are full of bacteria, viruses and germs of all sorts.” (5)

Marty Becker, an author and dog expert, takes issue with the proclamation that dog mouths are healthier than humans. “All you have to do is look, watch, smell and you’ll realize that is not true,” he said.

A strong immune system can help prevent any sort of sickness related to dogs and the bacteria and parasites they carry. But some frightening incidents have happened.

One UK woman for example developed an infection from her Italian greyhound’s saliva. She didn’t realize anything was wrong until she noticed her speech slurring during conversation with a relative.

The woman slumped down in her chair and had to spend two weeks in intensive care on antibiotics to get healthy again. Doctors found that she was carrying capnocytophaga canimorsus, a bacteria that thrives in dogs’ and cats’ mouths.

Altogether there have been 13 similar cases in the UK.

If you’ve ever locked tongues with your pup, you may have a special risk to be aware of. That is, disease conditions can result.

Bacteria in Dogs to Watch Out For 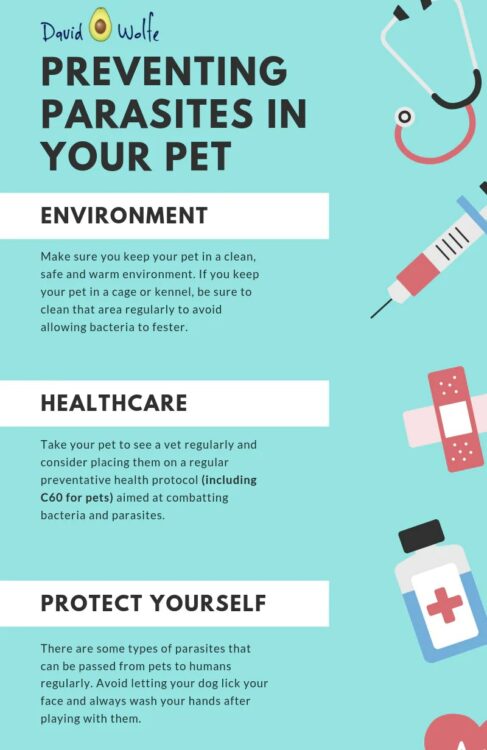 A 2015 study in PLOS One found that oral transfers of bacteria from dogs to owners can cause gingivitis and periodontal disease. One type of bacteria inflamed gums and even caused tooth loss in owners. (6)

A total of 16% of owners studied had this type of bacteria!

Along with the above concerns, there are other types of bacteria and parasites to watch out for in dogs, including the following: (7)

A ringworm infection comes from mold-like parasites living on cells in the outer layer of your skin. This infection is easy for dogs to pass onto you from kissing.

One lip-lock, whether accidental or on purpose, could be the beginning of disease.

As little as one lick from your dog can transfer this increasingly common but potentially deadly bacteria from your dog’s mouth to yours.

While dogs can carry it around with little to no health effects, most humans aren’t so lucky.

One of the most common forms of bacteria found in pets worldwide is pastuerella. It could enter your system from mouth-to-mouth contact, a scratch or cut.

This bacteria can cause a laundry list of symptoms including swelling, redness, a discharge of pus, and more.

Pastuerella is bad for children, who may get infected lymph nodes, fever and more. An infection of the joints, bones, or tendons may occur, along with pneumonia and eye infections. This infection is typically treated with antibiotics.

Similar to MRSA, staphylococcus auereus is caused by bacteria often found in a dog’s mouth. Higher levels have been linked to skin, eye, nose and throat infections.

An animal with this infection usually carries bacteria around the nose and anus.  If you suspect your dog has a bacterial infection, be sure to wash your bedding often.

Also, invest in natural parasite killing herbs and foods like the ones mentioned above.

This type of bacteria is resistant to antibiotics in many cases. Many natural anti-parasite and anti-viral medicines can aid in killing it.

This infection is so bad it even caused a man’s foot to be partially amputated after his dog licked his open wound. Another important reason to minimize your exposure!

In order to keep these bad bugs and parasites in dogs at bay, a parasite cleanse is always a good idea.

Consult your naturopathic doctor if you suspect any of the above issues in your human or canine family. For natural support, be sure to check out our shop for more info on parasite cleansing products or to purchase.