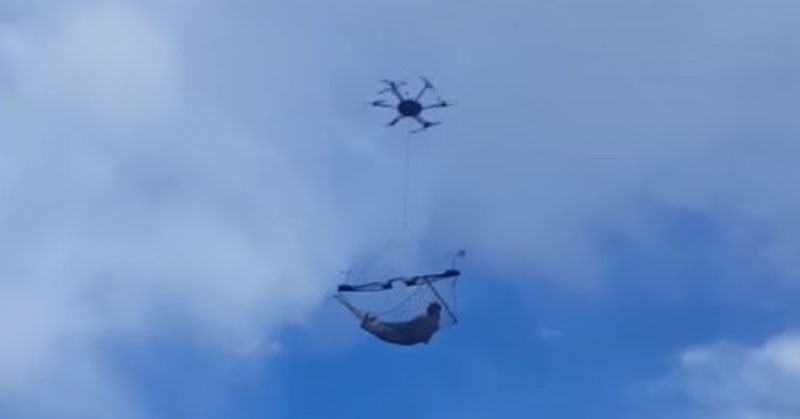 Video footage popped up not to long ago of a man in a hammock, attached to a drone, flying said drone around town like his own personal makeshift aircraft. He can be seen high about power lines and buildings flying around with ease.

The footage, which appears to be recorded on a cellphone, is bringing much amusement to many people online.

Just flying about in his drone hammock, this is why women live longer than men. pic.twitter.com/cRCDEQQYLz

But, this footage has raised a very serious question: is this real or fake?

Is This Video of a Drone Carrying a Person in a Hammock Fake? https://t.co/Gx0XjSLe1X #drone pic.twitter.com/g9AfsvzczE

Well, as awesome as a ride in a drone lifted hammock would be, this footage is actually fake.

The monotony of Netflix and chill bringing you down? Georgians may have come across the answer to urban boredom, after they spotted what appeared to be a man kicking back in a drone-suspended hammock flying high over the town of Khashuri.

Eye witnesses said that despite the apparent peril of floating some 10 metres above the ground, the man seemed to be perfectly laid-back, supping from a beer as he soared through the skies.

It later transpired that the man who was literally throwing caution to the wind was most likely a mannequin, with the stunt being used to promote a local beer.

That’s right. This epic video experience is actually fake. That’s a mannequin in the hammock and it’s all a stunt from a bear company in the country of Georgia.

Now, just because this video is a fake doesn’t mean that drone flying is impossible.

The video below shows some drone flying, but the men in the video had  to create and build their own drone for the video.

Warning: There is some inappropriate language in the video below.