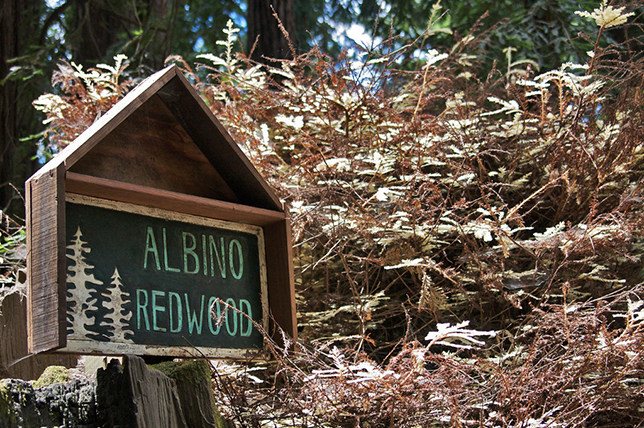 The Mystery of Albino Redwood Trees

By David Wolfe – Besides Bigfoot, probably the deepest held secret of the redwood forests is the existence of the albino redwood. Just like its animal counterparts, albino redwood trees have no pigments. They are even unable to produce chlorophyll! Thus, their needles are pale yellow or white instead of green.

Albino Redwoods lack the ability to create chlorophyll. They survive off the nutrients from a Mother Redwood tree. 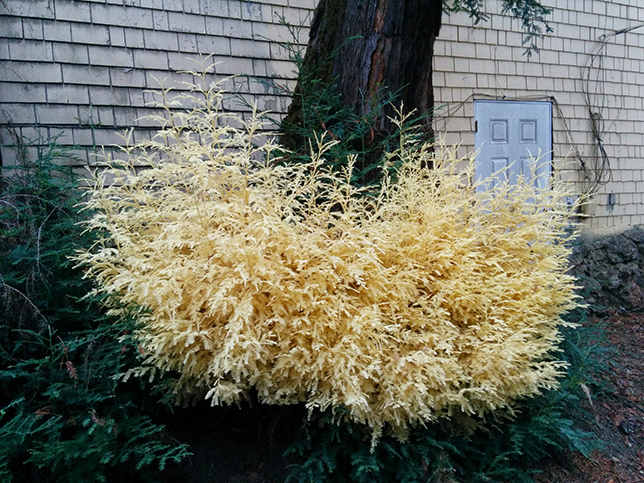 Generally, any plant species that lacks the ability to create chlorophyll would instantly die. However, because of the unique relationship between giant redwood mother trees and baby sprouts, albino redwoods can survive off of the nutrients created by the mother redwood tree. The albino redwood will graft its roots into an existing redwood tree and use the extra nutrients the tree produces. Many scientists call this parasitism, but real advocates of this rare redwood subspecies variation equate it to a sibling that never left home or got a job.
I like to see the arrangement of plants that symbiotically take care of each other.

Many Albino Redwoods are malnourished even if they find a strong Redwood to attach themselves. 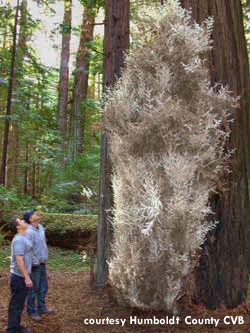 It should also be noted that even when albino redwoods attach themselves to a healthy redwood tree, they are still significantly malnourished. Thus, they have a similar appearance to an old, dried out Christmas tree. 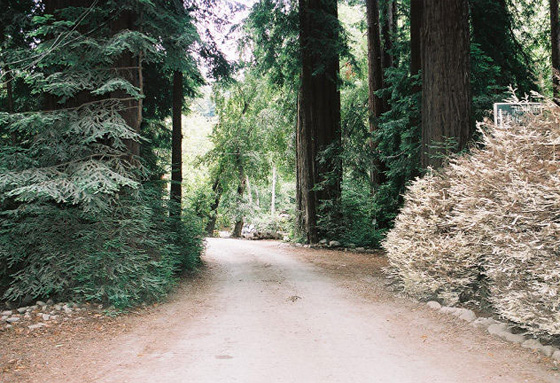 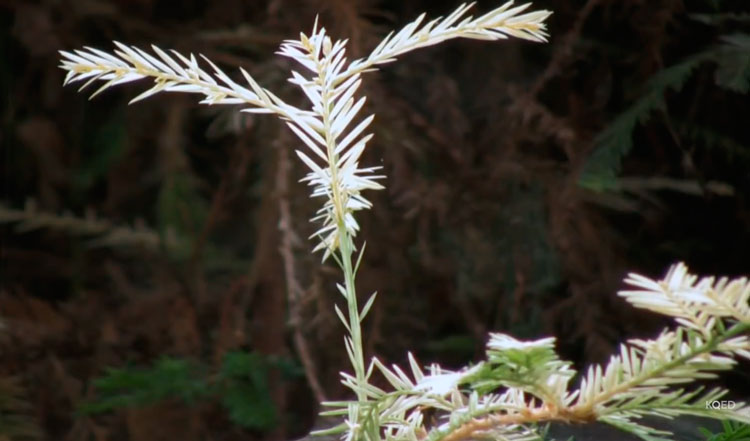 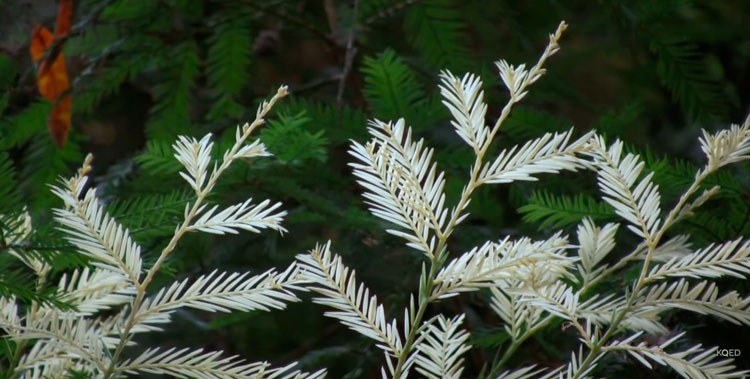 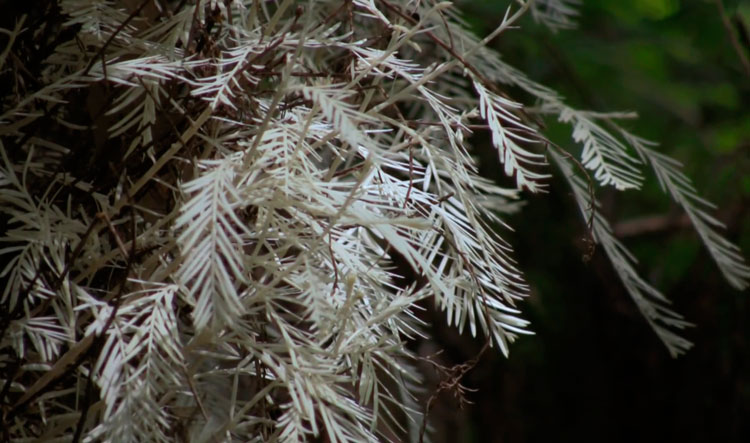 “Albinos tend to be near Redwood transition zones, and every one we study looks to be stressed. So one idea is that albinism is an adaptation to cope with stress. We’ve seen an unusual number of very young albinos coming up, which may be because of the drought conditions that California and the western states are experiencing.”
You can find a full article on these amazing redwood trees at National Geographic.

Some scientists believe Albino Redwoods are a result of environmental stress. 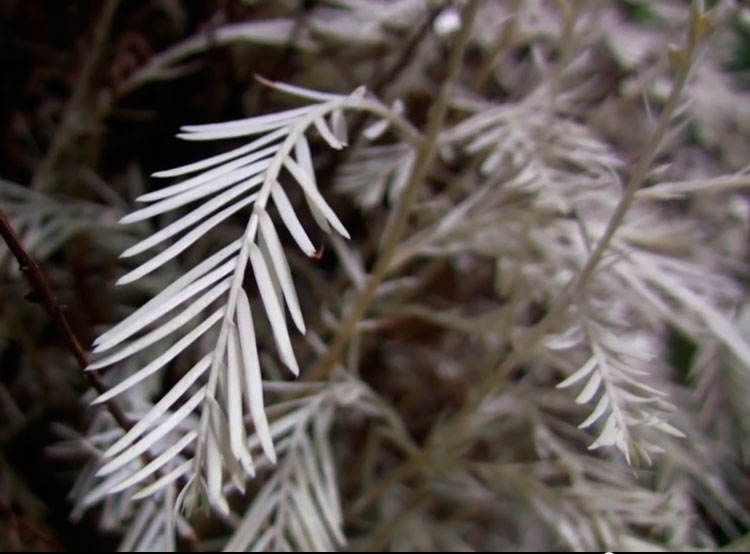 As previously stated, the people who document and study these rare forms of redwood trees consider them a very particular life-form that needs to be protected from too much human intervention. For that reason, the locations of albino and chimeric albino redwoods are kept secret. If you can prove yourself an enlightened individual with respect for nature, you may be able to get someone to show you these magnificent ghost trees. There are some available for viewing in California’s Humboldt Redwoods and Henry Cowell Redwoods State Parks. 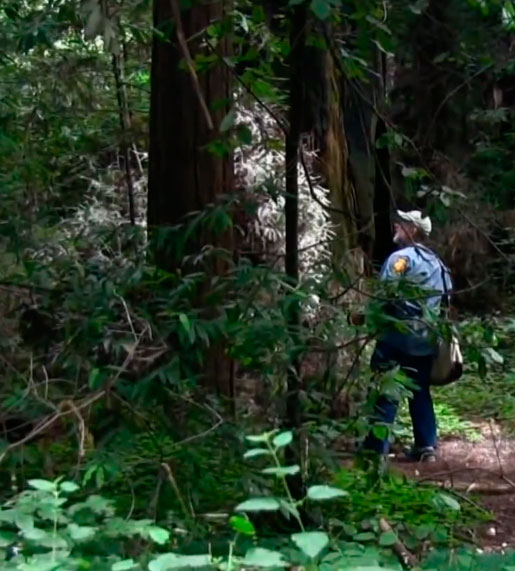 You can see Albino Redwoods in a couple Redwood State Parks, but you usually have to earn the trust of Albino Redwood enthusiasts to find them.

If you want to learn more about redwoods and the lesser known redwood varieties, take a look at the video below.
Actually, just watch it even if you are not interested. The peaceful forest scenes and calm talking of the redwood enthusiasts will make your day a more relaxed and enjoyable one.

I want to change the background of my phone to this picture. Nature is beautiful! 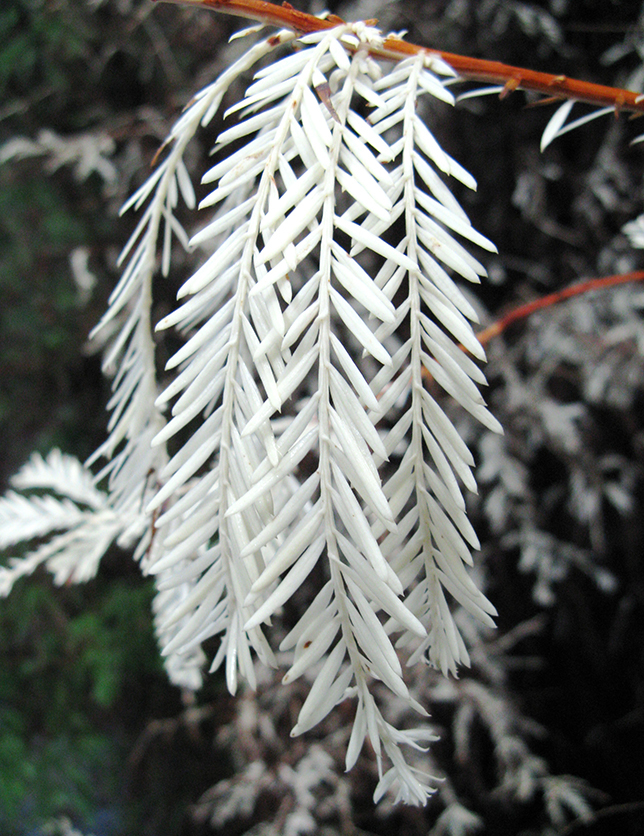