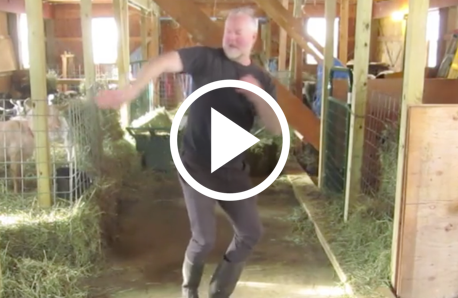 Farmer Jay Lavery has captured the attention of millions worldwide with a video that shows him unexpectedly dancing to a popular hip-hop song by Sia.

The video, which currently has a whopping 5.8 million views on Facebook, is accompanied by the following touching note from Lavery.

Dancing is how I stay warm in the barn and I never know when I’m going to break out into a dance. But what most people don’t know is that 15 years ago I had a traumatic back injury that caused me to have several back surgeries including a disectomy and a spinal fusion and never ending back pain. Dancing along with yoga and meditation are my only alternatives to pain medication. I hope this can inspire anyone to move in spite of pain.

Speaking with The Huffington Post, Lavery said he does “crazy things” often and usually only shares them with friends. This time, however, he decided to aim a little wider in hopes to inspire “people who love goats, people who have back issues, people who are getting older and people who just love hay.”

Interestingly enough, Lavery also said he’s received plenty of inquires as to where he gets the hay in his barn from.

To that, he insists, “it’s just regular hay from my own hay field!”

Did Lavery’s video surprise you or make you smile? Be sure to pass this post on to someone who could use either of those things!