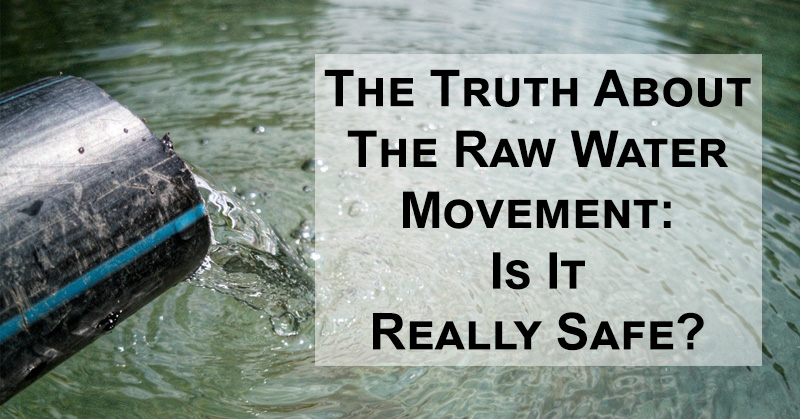 The Truth About The Raw Water Movement: Is It Really Safe?

You may have noticed that the topic of “raw water” has been making the rounds online.

In a nutshell, health-conscious individuals have been making a big deal about drinking unfiltered water from various streams. The belief is that said water contains helpful minerals that modern filtration processes normally remove.

While the belief is correct in theory, a number of health experts have raised concerns about the practice. Many participants in the trend are getting their “raw water” from streams that contain harmful bacteria like E. coli.

“We have to be aware that there are many species out there that are defecating, that are emptying the contents of their enteric tracts onto the land and into the water,” The Canadian Press quotes Public Health Ontario member Dr. Ray Copes as stating.

While Dr. Copes raises a valuable point – not all sources of water are clean and fit for drinking – the health community at large has unfortunately taken to mocking the idea of seeking raw water entirely, lambasting the idea that anyone would dare question the virtues of modern fluoride-laced bottled water.

For example, Science Based Medicine author David Gorski writes off the idea as “nonsense” and deems it “quackery” devoid of any conceivable benefits over tap and bottled water.

In reality, there are many benefits to drinking raw spring water – provided that water comes from a clean, trustworthy source.

By writing off the raw water movement entirely, the health community is suggesting that water filled with the aforementioned contaminants is better for you than the likes of the unfiltered spring water that comes out of taps in Iceland and Slovenia.

As What’s On reports, Iceland’s water makes its way to citizens’ taps straight from fresh springs. Even critics admit that said water is some of the cleanest and healthiest in the world. It’s so clean, in fact, that tourists are advised not to worry about bringing bottled water along with them on hikes. The conditions in Iceland are such that Iceland is filled with springs from which raw, untreated and healthy water can be sourced.

Of course, Iceland is not the only place in the world you can get good, unfiltered, raw spring water.

David Wolfe has made a mission out of finding the very best spring water around the world – including in North America.

While modern scientists would have you believe that all proponents of the raw water movement are encouraging folks to just go out and start guzzling any water in sight, true spring water enthusiasts like David Wolfe have been warning the public against doing just that for years.

“Just because water comes from a spring does not mean it is safe to drink,” David warned in his 2008 book Amazing Grace.

“Over the past 30 years or so there has been so much development and ground contamination that water is not as safe as it was years ago.”

“Most springs are a good source of clean water,” the book continues. “The exceptions to the rule are usually when you find a spring in a populated area, where there are a lot of people or livestock around, in an area where there has been development and potentially hazardous chemicals dumped into the water supply, or where there is major industry nearby.”

This certainly describes a good portion of the water well-intentioned people caught up in the raw water movement are consuming.

The takeaway? Those seeking the benefits of raw water need to put some thought and care into what springs they drink from. David’s book Amazing Grace is a great place to start if you seek more information on the topic.

While you absolutely will reap the benefits if you put the effort in to find good, clean spring water, those who can’t make that commitment for whatever reason don’t have to feel left out. Take a look at one of the many quality filters available that can help you purify your tap water. It won’t be as revitalizing as natural spring water – but it’s the next best thing.

Stay safe, drink well and have The Best Day Ever!

Sources:
What’s On
Science Based Medicine
The Canadian Press
Grapevine