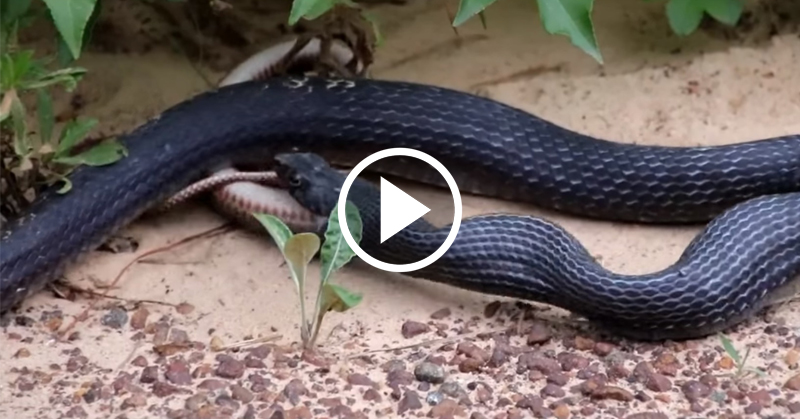 Christopher Reynolds and his wife Nina caught something on film that just might make your skin crawl. Their footage shows a large black snake regurgitating its meal, which consisted of another snake. However, the couple soon realized a shocking detail.

As the prey emerged from his captor’s jaws, the couple noticed the snake’s dinner was still wriggling with life.

You can hear Christopher and Nina gasping in astonishment as the scene unfolds.

“My wife and I were leaving my mother’s when I caught a glimpse of this snake while I drove past it,” Christopher wrote on YouTube.  “I stopped and backed up to take some photographs. Nina mentioned I should take some video. I am happy I did.”

The cringe-worthy video opens with only a tip, no bigger than a pinkie finger, emerging from the predator’s mouth. However, it soon becomes evident that the would-be meal is much larger than it had first seemed.

Because it felt threatened by the couple’s presence, the reptile regurgitates its meal to prepare for a quick escape. And, sure enough, he soon after slithers off into the bushes, leaving behind his intended meal.

The prey, although seemingly dazed at the end of the video, appears to be relatively unharmed.  Amazing!

Watch the fascinating moment when the snake regurgitates his huge dinner: