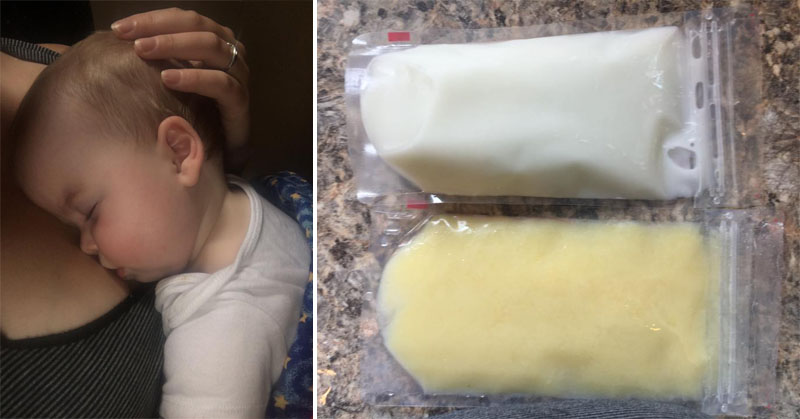 Ashlee, who breast-feeds her 7-month old daughter Elliot, proves to the world why breast-feeding is so important…

Ashlee Chase is proving all the breast-feeding haters wrong with her photos of her milk before and after her daughter caught a cold are going viral. According to Ashlee, her breast milk actually changed color in response to her daughter’s cold. The photo from Facebook shows one bag of milk that looks pearly white and another that looks nearly yellow.

It turns out that breast milk can change dramatically in response to a baby’s saliva. In return there is an immune system response which is shown in the milk.

Leukocytes, white blood cells of the immune system that protect the body against infection and foreign invaders, increase dramatically in a woman’s milk supply when her baby is sick, Wider explains.

Ashlee spoke to Yahoo Lifestyle about how she discovered the powerful effects of breast milk:

“I read before that your milk could change for different reasons, but I was so sleep-deprived that morning, I just thought there was something wrong with it,”

She went on to talk about the difference between her 7-year old’s cold and Elliot’s:

“The illness knocked my 7-year-old out for a week, but the baby only got a runny nose and a slight fever the night before I noticed the yellow,”

“The baby’s saliva goes back into the breast and then the breast manufactures special milk to protect the baby,”

Leigh Anne O’Connor went on to talk about the power of breast feeding:

“This is one of nature’s beautiful tricks to protect the offspring and to keep the population healthy and growing.”

Ashlee Chase’s 7-month old was sick but she continued to breast-feed her:

It look’s like all that Elliot needed was some of her mother’s milk:

Now that she’s over her cold, Elliot is ready for trick-or-treating with Mom