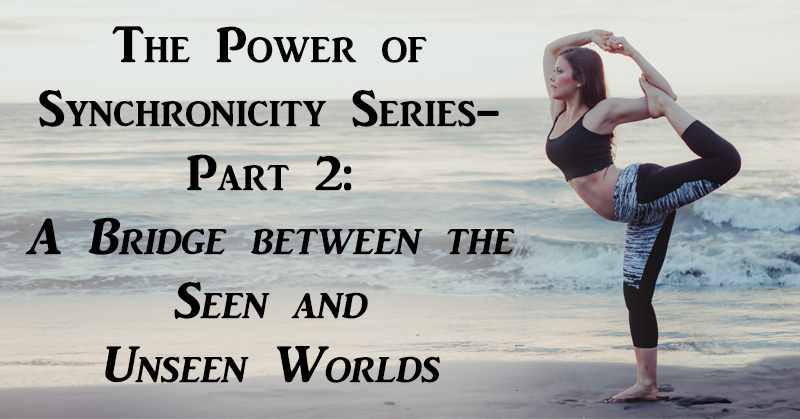 The Power of Synchronicity Series- Part 2: A Bridge between the Seen and Unseen Worlds

In The Power of Synchronicity Series- Part 1– What Exactly is Synchronicity & How Does It Work?–  we explored the concept in general terms and on an everyday level- how most would come to understand it. But here, we are going to take it a step further and explore Carl Jung’s theory of synchronicity which is rooted in the connection between the seen and unseen worlds. We’ll also take a look at a second type that many don’t even think about- a type of event that only has an outer experience, without an inner, personal experience to match, but still holds deep meaning.

Today, we shed light on what bridges the inner and outer or seen and unseen worlds. The seen is the material world around you. The things you can see, touch, smell and that are in motion. The unseen world is the non-physical, one of spirit, a higher power, universal force, otherwise known as psychic phenomena.

The link to the unseen world
Science is deeply rooted in the seen world, materialism- ie: the material world. Which is usually very easy to prove with cause and effect and of course, the tangibility of it. This view believes that consciousness is limited to the physical brain whereas the theory we are discussing here, supports the unseen world- that consciousness is transcendental, connected to a higher power, and exists beyond the limits of space and time.

Carl Jung, a Swiss analytical psychologist, was the first to explore synchronicity in great detail and try to explain its relevance and meaning beyond mere luck. He believed synchronicity to be an “acausal connection”, meaning related by meaning rather than cause. They are “meaningful coincidences” if they occur with no causal relationship, yet seem to be meaningfully related.

But there’s more to the story than that. Being “meaningfully related”, to Jung, grew into the theory of a connection of two or more psychic and physical phenomena. He believed synchronicity to have this connection to the unseen world. A way for the unseen world to communicate with us in the seen world.

Not rational or logical
Although some scientists see potential evidence of synchronicity in areas of research such as quantum theory, chaos theory, and fractal geometry, the concept is not testable by any current scientific method. This acausal connection then was thought of as illogical or unprovable which had Jung classified as a mystic and often not taken as seriously by other psychological thought leaders (as it defies science).

Jung remained confident in his belief and stressed synchronicity should not just be chalked up as merely a coincidence or luck (which most do). It has deep meaning from the unseen world. It was a message, a sign, support from the spirits or the Universe to reach those in the seen world to provide direction and personalized guidance. Synchronicity, as Jung had come to explain it, was a bridge of, some might say, magical wisdom that connected these two worlds.

EXAMPLE OF TYPE 1: A friend of mine was looking for a job and with a full day of searching and no such luck, she took a break at the nearest coffee shop. Overhearing a conversation between two people at the table behind her, one said they were leaving their job at the yoga studio and they were looking for a replacement for the front desk. She headed over to the studio right away and ended up getting the job on the spot!

The second type of Synchronicity, which many don’t even consider to be a synchronistic event, is a type of event that only has an outer experience, without an inner, personal experience to match- yet still deeply meaningful.

EXAMPLE  OF TYPE 2:  The easier and probably most common example of this is 11:11 or seeing the same number in a row- 1:11, 2:22 or even getting change that is $5.55, or seeing a license plate with repeating numbers. This is the Universe cheering you on in agreement, confirmation you are going in the right direction and/or a nudge to keep going with something.

David Wolfe says synchronicity is knowing, not just a theory but really living and understanding it. He describes it as “editor notes into the script of our reality. When you see those editors notes, it connects you to deeper levels of meaning or a closer connection to your creator, and you understand that reality as we see it isn’t exactly perfectly fitted together.”

The Holy Flow
There’s so much more to the story, on the perimeter of our reality that is irrational, unusual, paranormal, impossible, improbable, but occasionally comes into being and that’s where we should live. Wolfe suggests that we follow these up, look further, pursue when these synchronistic events happen because they most often lead to great things, more synchronistic events and help us ride the wave of the Holy Flow (ie: hyper synchronicity- more to come on this in the next articles!).

Over the years, I have come to interpret this mysterious phenomenon as support from beyond that guides me and confirms that I am in sync with the flow of life. So I invite you, take them seriously (okay, not too seriously), be open and aware so you can spot this playful guidance because it is happening all around you, always. Take time to understand the deeper meaning and significance, what does it mean to you? Trust that synchronistic events serve a purpose and are working for you.

Interested to know how all this defines our potential for deeper wisdom and connection to our Soul? I’ll give you a hint, it’s the archetypes (psychic instincts) and connection to a “shared field of energy” that gives synchronicity its powerful charge on the path to self-realization and inner peace. I will explain further in Part 3!

Interested in learning about more real-life magic and how you can harness it in everyday life? Sign up for my love letters by clicking on the image below!