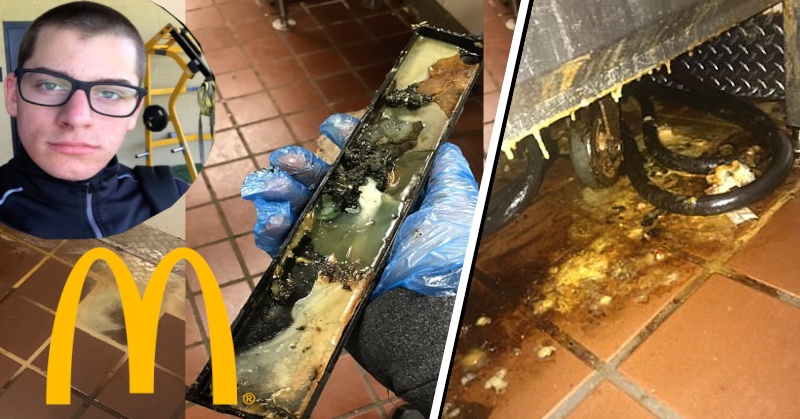 When you’re paying a few bucks for food that takes a few minutes to prepare, it’s safe to assume the quality isn’t too great.

But according to one disgruntled McDonald’s employee—who decided to expose the company in a viral Twitter rant—after seeing what goes on in the kitchen, you won’t be “lovin’ it.”

“This came out of McDonald’s ice cream machine in case y’all were wondering,” reads the caption on “Nick’s” tweet:

This came out of McDonald's ice cream machine in case y'all were wondering… pic.twitter.com/DTXXpzE7Ce

“Nick”, who goes by the Twitter handle @phuckyounick, told his followers, “I got fired from McDonald’s. I strategically planned this because I start working at my new job Friday. I planned on losing my job.”

And so, he put together a string of tweets and photos revealing the gag-inducing conditions inside the kitchen:

In disbelief, Twitter users began questioning if the gunky trays were, instead, grease traps.

But “Nick” assured them:

This is the side of the ice cream machine! It's not from a grease trap pic.twitter.com/nMpnFxAvZ4

He then posted a photo of the grease trap:

This is the grease trap for all the people that think I'm lying… pic.twitter.com/fKQjxvKzM5

At this point, and with clearly nothing left to lose, “Nick” decided to expose the company’s frozen meat products:

Since I'm exposing McDonald's I might as well show y'all what y'all really eating… fresh out the freezer. pic.twitter.com/KZ7Ao1kWsR

I mean it's no surprise that it's frozen but this shit isn't even real meat or fish.

How does your tweet about ONE franchise of McDonald's justifies all McDonald's?? pic.twitter.com/64ryGc8mG7

This isn’t the first time minimum wage restaurant workers have rebelled against their employers with an online exposé.

Back in 2013, a worker for Golden Corral posted a video to YouTube claiming that his manager had stored raw meat outside behind their dumpster to avoid being seen by the local health inspector.

You Can Watch His Video Here: