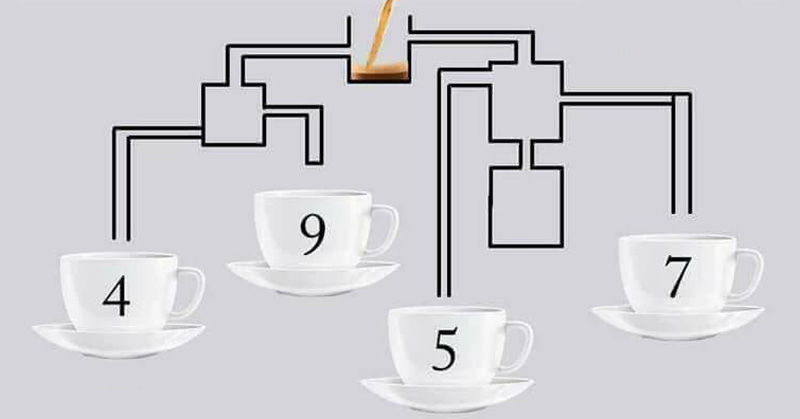 Strange Coffee Riddle Is Confusing The Internet: Which Cup Fills Up First?

This riddle is taking the internet by storm and confusing everyone. People aren’t quite sure what to make of this picture riddle about gravity. The picture shows a jug of coffee being poured into a series of pipes. Underneath these pipes are five different cups of coffee. The riddle is to try to figure out which cup of coffee would fill up first.

This fun optical illusion even had verified Twitter users stumped as thousands of people argued back and forth about which cup would fill up first. Some people even took multiple guesses but in the end there were just a few smart, detail-oriented people who could figure out the answer.

The original tweet with the image and riddle has over 2,000 retweets. People were immediately frustrated with how difficult it was to figure out. Many people had different answers but one Twitter user found the right one. Check out the riddle below and see if you can figure it out for yourself – and no cheating. Test your brainpower with this mind-bending picture quiz.

Here is the original coffee riddle – can you figure out which cup fills up first on your own?

People on Twitter had a lot of different guesses but most of them were wrong:

Luckily for us, a couple Twitter users were bright enough to figure out the riddle and share the answer with the rest of us:

5 is the only one with an opening.

One verified Twitter user thought they had the answer:

However, one woman pointed out the real answer:

9 is blocked off! All are except 5

Her response was one of disbelief…

So, this smart young Twitter user decided to show instead of tell: